By the end of the First World War the front line landscape had been turned into a huge wilderness. When people returned after the conflict they were faced with the tremendous challenge of reconstructing the region and making it habitable. The traces of war were then erased to become part of the archaeological soil archive.

Scarcely 30 centimetres deep and invisible to the naked eye, the archaeological remains of the war lie dormant in the soil all over the Westhoek region. This exhibition shows for the first time the findings of over 10 years of archaeological investigations, thus revealing very many impressive artefacts. An examination is made of day-to-day life in the trenches, the material relics of trench warfare and the story of some of the fallen soldiers whose bodies were recovered. Lastly, thanks to a series of scientific techniques, the traces of war can emerge the light of day again. 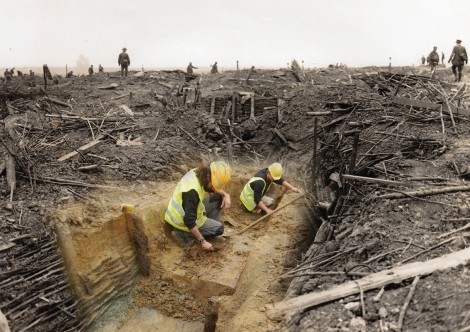